AND THE WINNER IS… (by Mitch Albom)

Where To Buy Tickets

THE STORY: And The Winner Is tells the comic story of Tyler Johnes, a self-obsessed movie star known for the “Chippen-Cop” movie franchise; Chippendale dancers by day – Cops by night. Tyler is finally nominated for an Oscar, then dies the night before the awards. Outraged at his bad luck and determined to know if he wins (even though he’s dead), he bargains with a heavenly gatekeeper to return to earth for the big night. Along the way, he drags his agent, his acting rival, his bombshell girlfriend and his ex-wife into the journey, in a wildly twisting tale of Hollywood, the afterlife, and how we are judged.

RATING PG-13: Parents Strongly Cautioned. Some Material May Be Inappropriate For Children Under 13.

ABOUT THE AUTHOR: Mitch Albom, the bestselling author who brought you “Tuesdays with Morrie”, “The Five People You Meet in Heaven” and “Have A Little Faith”. “And The Winner Is” was Mitch Albom’s second comedy. It saw its world premiere at the Purple Rose Theater in Chelsea, MI, in the summer of 2005 and its west coast premiere at the Laguna Playhouse in the summer of 2006.

STAGE MANAGERS
STAGE MANAGER/SOUND OPS – Stephanie Asprocolas: Stephanie has been doing theatre for 8 years. She, being a Jane of all trades if you will, is on the board of Edison Valley Playhouses, produces a variety coffee house, stage manages and builds sets. When she’s not a theatre, she hangs up her cape and goes to work at Best Buy in Bridgewater, cuts hair and is a hobbist photographer. She wants to thank her family for always being there for her and her nominee for best cinematography. She dedicates this show to him because without him she wouldn’t have half the strength she does.

ASSISTANT STAGE MANAGER and SPECIAL THANKS TO: Bob Windhorst – For everything!

REVIEWS FROM OTHER PRODUCTIONS:

“I suppose it is always a worthwhile thing to be reminded about mending relationships and getting right with God before it is too late. But it is truly a rare and special thing to have such a reminder included in one of the funniest plays I’ve ever seen.” —Detroit Monitor.

“‘Winner’ shares with Albom’s bestselling ‘Morrie’ and ‘The Five People You Meet in Heaven’ the subject of life and the lessons it teaches.” –Daryl H. Miller, Los Angeles Times

It’s A Winner: “Think It’s A Wonderful Life right down to the Seamus/Clarence character. But Albom’s version offers a fresh, funny twist. Look for plenty of digs at Hollywood, the movie business, lengthy awards shows and celebrity egos… Much of the humor is rooted in ridiculous truth.” –Judith Cookis-Rubens, Oakland Press 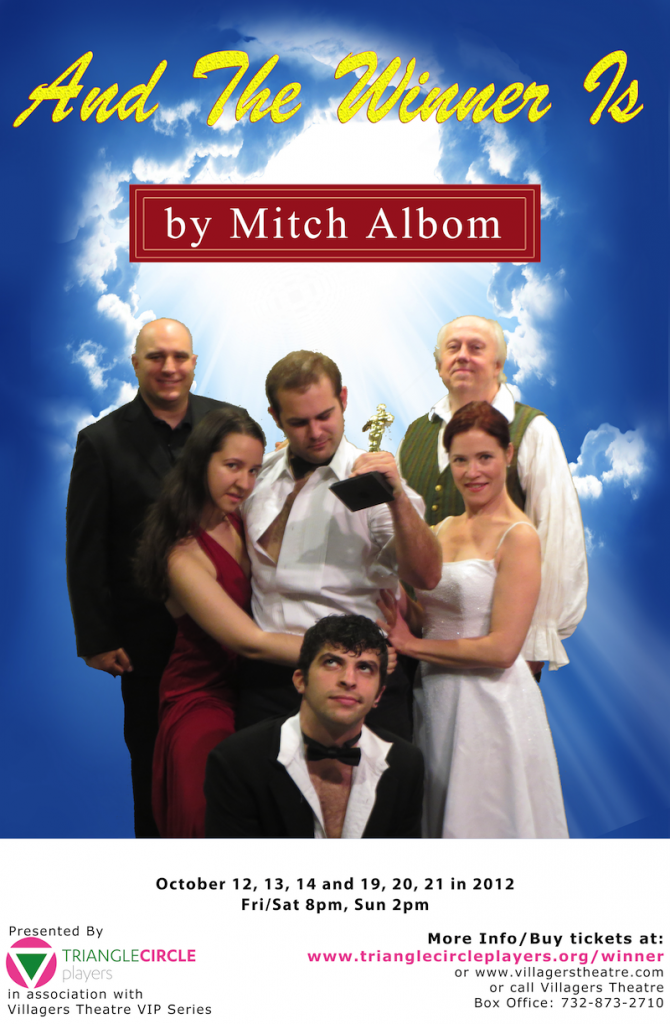