Out of six shows, we had two sold-out performances – almost three!

Audience members had this to say:

Articles about Darren Nye and the Production:

In a Nutshell – from the Director:

Avow has a message of love, self-love and acceptance. It shows us that the Catholic Church’s view on homosexuality and celibacy, can often help to take away our dignity and tear us apart rather than bring people together and promote love between two people. Though there is hope for the Catholic Church; some progressive priests are willing to put their careers on the line and marry two gay men. It also lets you ponder the possibility that perhaps Catholic Priests should be allowed to marry themselves; does attempting to hold them to a higher standard, end up destroying some of their own lives and ability to be happy? Avow also delves into the fact that two gay men can be married, adopt children and build real families.

“Avow” focuses on the universal themes and dilemmas of faith, commitment, human sexuality, obedience and family.

The Story: Brian and Tom ask their liberal and forward-thinking parish priest, Father Raymond, to witness and bless their vows to each other. Although Father Raymond understands their affection for each other, he holds that they must live a celibate life if they wish to be part of the Church. Brian is outraged. Tom becomes reflective, as Father Raymond’s words strike a chord in him. Brian’s sister, Irene, a concert pianist, is single and pregnant from an affair. Brian has convinced her to have the baby, which he and Tom will adopt. Irene, desiring nothing more than her brother’s happiness and security, tries to mediate between Brian and Tom and Father Raymond. Much to her surprise she discovers a deep attraction to Father Raymond. The attraction turns out to be mutual, forcing Father Raymond to reexamine his life of commitment and loneliness. In the meantime, Brian’s and Irene’s mother, Rose, works very hard through her confessor, Father Nash (who is also Father Raymond’s confessor), to come to terms with her son’s and daughter’s “exotic” lifestyles. As Tom begins to pull away from Brian, Father Raymond moves closer to Irene. Tom’s and Brian’s catalytic request creates five separate and linked spiritual journeys, each seeking to balance passion and faith. 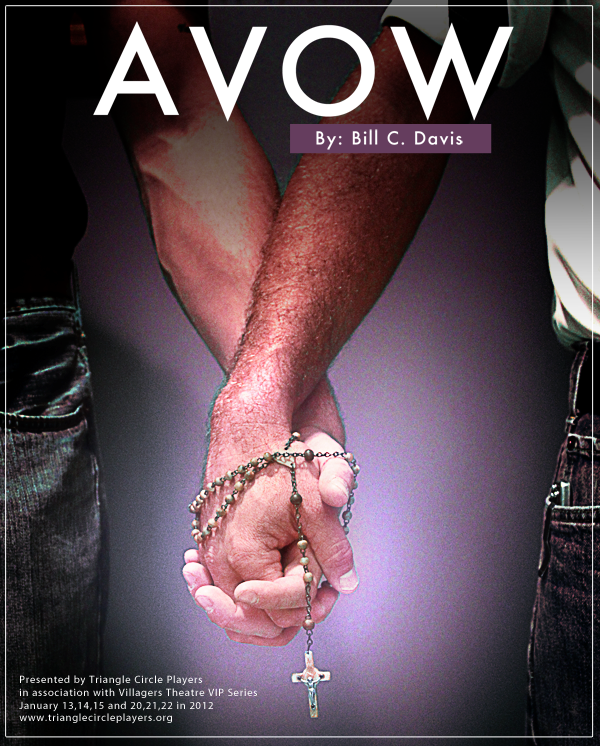 Bill C. Davis may be best known as the author of Mass Appeal, which premiered at The Manhattan Theatre Club, produced by Lynne Meadow, directed by Geraldine Fitzgerald, and starred Milo O’Shea and Eric Roberts.

The play moved to Broadway where it received the Outer Critic’s Circle Award. Mr. Davis adapted the play as a screenplay and it was made into a movie starring Jack Lemmon and Charles Durning and was chosen one of the ten best films for that year by The National Board of Review.

In 1994, in a time before gay marriage was a hot political issue in the United States, Mr. Davis wrote the first draft of Avow. The script has recently been revised by Mr. Davis. Other than a recent reading at Grace House in NYC in September 2011, the revised script is being performed for the first time by Triangle Circle Players.

Avow has a long history. It’s first production was at the George Street Playhouse in 1996 with Gillian Lynne directing; it was also videotaped. It then had a workshop production at the Director’s Company in New York City in 1998. There were also a few readings with Michael Lindsay-Hogg directing, who was intending to direct the play in New York, but the timing was not in the cards. Avow was finally done off-Broadway at the Century Theatre Center in the summer of 2000. It appeared off-Broadway again in 2009 at the 45th Street Theatre.

The play has been produced around the country. The play has also been translated into French by Dominique Piat – entitled – Parcours – (Journeys) – and In German by Pascal Breuer – entitled – Bekenntnisse – (Confessions.)